Hailing from the Emerald City, better known as Seattle, Tarik Abouzied is a musical wizard with so much to share. Speaking with him about his craft as a instrumentalist and the industry in general, is as refreshing as meeting up with an old friend at your favorite coffee shop. The passion exudes from his every word and you can tell music isn’t just a hobby, or career for him; it’s a lifestyle. He’s a performer with a vast collection of albums in his repertoire. He’s a teacher for universities, high schools and middle schools across the country. And here, in this interview, he’s a man who gets the chance to tell his story.

“I was drawn to instruments and playing music all through my childhood. My family moved around a lot, taking me to a different school every year or two until high school, so I think music became something that lent some consistency and gave me a way to relate to kids in new places,” Tarik explained when I inquired about how he got involved in music. “It was a skill I was good at and brought positive attention so I grabbed onto it as a way to define myself, an otherwise insecure kid,” he confessed. “My parents got divorced when I was a teenager and my Dad moved away while my Mom worked crazy hours, so I was left to my own devices, and playing was a good distraction from a lot of the more terrible parts of that experience. Of course, I wasn’t aware of any of that growing up, I just thought it felt good when I had an instrument in my hands and I followed that feeling.

I didn’t think I would play professionally. I actually laughed at my high school music teacher when he suggested I pursue it as a career. My parents had me convinced I wanted to get into computer science but by my second year of college I had switched to music. I was spending all my time outside of class playing, started seeing live shows, and was hooked. I remember the moment I decided to go for it, driving at night listening to a Ray Brown Trio recording of this ballad ‘Lament.’ They were playing together with this psychic connection and making me feel so much. By the time the song ended I felt this overwhelming need to understand how they pulled that off. And yes, my parents were incredibly disappointed,” he added, as if knowing my next question.

Happy Orchestra is Tarik’s latest venture. Seeming to be the epitome of a team player from his musical resume, it’s only fitting that Tarik would form a band of industry greats that to me, pull a lot of inspiration from the Ray Brown Trio, which initially inspired him to start a life in music. 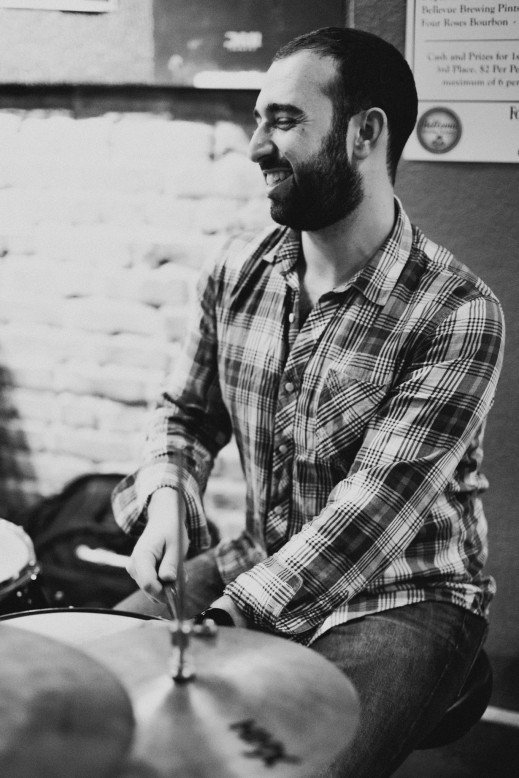 “I went through a progression in music from playing generally easy/popular music as a teenager, into jazz from the 50’s and 60’s in college, into really complex modern jazz after graduating. I was challenging myself more and more but playing music that connected with fewer and fewer people,” Tarik explained as he started speaking on the formation of Happy Orchestra. “Eventually, I became convinced that it was impossible to create music that was engaging to both myself as a player and to an audience in some kind of personal, connecting way. Then in 2011 I was lucky enough to join McTuff, a jazz/funk organ trio that did just that. The music was incredibly fun to play and the band had a strong following that would see us week after week.

A couple of years into McTuff I went through some crushing personal episodes and lost a few close friends and loved ones. I was incredibly depressed and sort of falling apart but, just like when I was a kid, the music saved me. This time around I became conscious of how healing and positive music was for myself and how much it had been my entire life. Just as importantly, it was doing the same for the folks that would go out of their way to watch us.

So, Happy Orchestra is really the result of my new relationship with music; less an intellectual exercise and more something I wanted to use to improve my life and the lives of people around me,” Tarik pronounced almost as if he was realizing the purpose all over again. “There’s so much heaviness at every level of life, whether it’s personal or societal or political, and I want to contribute to the other side of that. I just want to make people happy.” 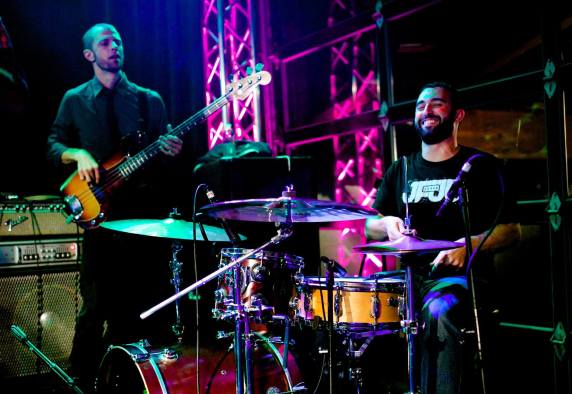 And that is exactly what he does. Not only demonstrated with his music, Tarik exudes a certain positivity that is as rare and unique as the music he stands behind.

That being said, I asked a question that I’m sure may occur to you too after reading this piece on Tarik and researching Happy Orchestra… ‘are you a band, or an initiative?”

“That’s a hard question to answer! The band wouldn’t exist without the emotional initiative behind it, but that initiative would have no reach without the music. So both, really,” Tarik concluded.

As such an evident appreciator of music, I wondered if there was a song he’d recently heard that he wished he was a part of.

“I’ve been listening to ‘Girl Loves Me’ from Bowie’s new album Blackstar non-stop. The lyrics are this heavy blend of a fictional language from Clockwork Orange and a gay slang language used in British clubs in the 60’s, and the melody he sings is unlike anything I’ve ever heard. It’s an incredibly dark song, and the mood the musicians create to support that darkness fits perfectly. Not happy, I know, but a perfect example of deliberately shaping the music to affect a mood,” the similarities between Tarik’s explanation of this song and his own music are uncanny (c’mon, I know it’s not just me).

“The personnel on that record are all world-class jazz musicians, and having my musicianship directed by somebody with Bowie’s vision and ability to reach people on a personal level sounds like a dream to me. D’Angelo’s records make me daydream the same way,” he finished.

I love asking artists and musicians who inspires them. Both personally and musically. I think once you know that, you can really draw conclusions about them that give you so much insight into their creativity and thought process. I have to say though, Tarik’s response was unlike any other I’ve gotten and it resonated with me in a my-20’s-have-me-feeling-confused-but-put-together way.

“I would say my biggest inspiration in all aspects of life has been the gradually crystallizing knowledge that I am an idiot. The older I get, the more music I hear, the more people I interact with, the more I travel, the more I run into my own limitations, the more I realize that what I’ve been exposed to and understand are only a minuscule fraction of what’s out there

The people I’m inspired by now are the ones most curious and humble about their talents and place in life, who work hard to better themselves and contribute something positive. The outlook and work of Louis CK and Stephen Colbert, the musicianship of Chris Potter and Chris Thile, and the interactions I have with the people in Happy are all endless sources of inspiration for me.”

“There’s a communal energy at a show that doesn’t translate to video or recordings. Of course, I hope anything we create will make people feel good, but I don’t think anything can compare to being in a room packed with people getting out of their own heads and moving together. There’s nothing like that feeling and none of us get in that space enough.”

I couldn’t agree more. There is a certain headspace that comes from witnessing a live musical experience that no one can re-create without a band and a hundred other people there with them. But Tarik’s life isn’t only Happy Orchestra, in fact, it’s a much more than most people have in a decade. He says balancing it can be “tricky,” but he always just “prepares for three different nights of music in a week.”

“Everything I play serves to make me a better performer, writer, and bandleader. The harder balance to find is the one between being a self-employed artist and a human being. It’s easy to work myself ragged if I’m not careful about managing my time and energy, a lesson I learned the hard way over the last ten years,” Tarik confessed.

Thinking about him pursuing anything other than music seems out of reach when you speak to him for even a few minutes. This man has a passion for creating and sharing that only great musicians possess. Expose yourself to greatness: