Nick Nace is your favorite cousin that you only get to see a few times a year. Or at least that’s how I felt when we sat down to chat about all things music yesterday. Canadian-born, New York-influenced and Nashville-inspired, Nick is a singer/songwriter with many stories to tell.

He started out by telling me about how he got pulled over on his way to meet me. With humor in his tone he said,

“I have an Ontario driver’s license and a rental car with Florida plates, I think it was more complicated than it was worth for the cop to worry about me going ten miles over the speed limit,” he laughed.

“That’s a good question,” Nick paused when I asked him about the moment he realized he wanted to pursue music. “I’m thirty-five now and I guess it was about four years ago that I realized I wasn’t getting younger,” he confessed. “I mean, I’m not particularly good at much else. I almost came to Nashville two years ago but I chickened out. With this move I just thought, ‘well, I’ll either sink or swim.’ Touring and living are both a lot cheaper down here so I was ready.”

Nick has only been in Music City for about a month, but he says he’s already seeing people he knows at local spots. Something he wasn’t used to in New York City.

“I actually moved to New York [from Ontario] to do theater. I was in some off-off-off-off Broadway one acts and festivals,” he laughed, “But everyone always said I looked more like a musician than an actor, and I felt more like one too.

There came a time where I was ready to say my own words, instead of what someone else wrote. I taught myself guitar at nineteen and I was pretty bad at it for a long time, but I felt like I had an aptitude for it.”

He took a moment to think before saying,

“I think most musicians and writers have a healthy dose of delusion, I’m definitely guilty of it, where it’s some type of self-preservation to assume you’re great, or at least better than others you’ve heard. I took a songwriting workshop a while back with Steve Earle and I remember him saying; ‘I can’t teach you to be a good writer, but I can help you get better, so if you came here to learn how to be one you can leave – that’s something you’re born with.’ No one left. So that proves my point a bit,” Nick joked.

He was part of a duo for a long time (over a decade). A Brief View of the Hudson was named best Folk duo by the NY Press, recorded two albums, toured Europe, the U.S. and composed the soundtrack for Tell Your Friends: The Concert Film, which premiered at SXSW.

“There are a lot of differences between being a part of a duo and your own solo act,” he started, “She’s like my sister and we still keep in touch a lot! She’s married now and moved back home to Texas. It was fun learning to do everything with someone going through it with you and she was a great, great singer. Being your own entity always streamlines things though.”

“Some of our music used to be co-writes, but I think personally, my writing has evolved and gotten better. When we were a duo we focused on a lot of upbeat ‘chug-a-lug’ type of country, but now I practice technique a lot more like finger picking and things like that.”

You can hear the process of Nick’s songwriting brought to life in his current favorite song and latest single, “She May Be Insane (But I Love Her Like Crazy).”

“I have newer songs that no one’s heard that I think mean the most to me at the present time, but ‘She May Be Insane’ is just vibey. The song itself is about my ex-girlfriend and she said to be when the video came out, ‘now everyone thinks I poison people,’ I told her she was wrong – but I guess it could be taken that way,” he concluded.

The video is very literal and goes hand-in-hand with the lyrical content in an uncanny way, so you could easily believe the woman in the video is the same one the song is referring to, but I’m here to break that stigma.

The storyline behind the video was actually based on a true story of a woman in Florida known as, Stacy Castor. Director Victor Varnado thought up the concept and executed it in a very unconventional way.

Nick has performed in some pretty amazing places throughout the U.S. and Europe and has a tour streaming through Ireland next month. As for his favorite performance to date?

“Oh in Spain!” He didn’t even hesitate when I asked the question. “It was a region known as, Catalonia closer to France. A friend had hooked up the show for us through a local music festival. When we got there it was insane – they put us up in an apartment and we were featured in the local newspaper. We played in an outdoor courtyard for 80-100 people and there was this brick wall covered in ivy and people were smoking joints as the sun was setting,” he smiled as if he was remembering it, “it was just amazing. Something you couldn’t even imagine happening until it did.”

Nick says he hopes that listeners will gain a sense of poetic story-telling from his music and see the work he puts in to create it. He wants people to continue to tell him, “we believed every word you said,” when he gets off stage. But most of all, he wants his music to make them feel something. 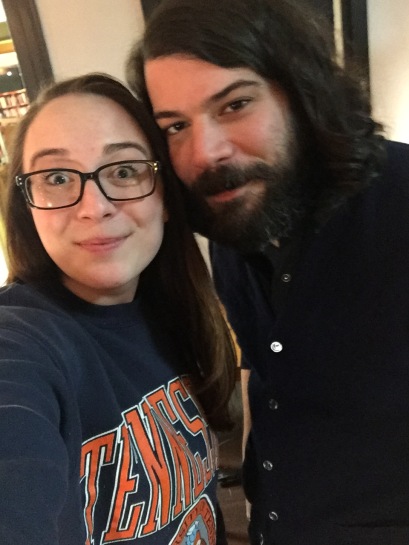 4 thoughts on “Across the Table with Nick Nace”