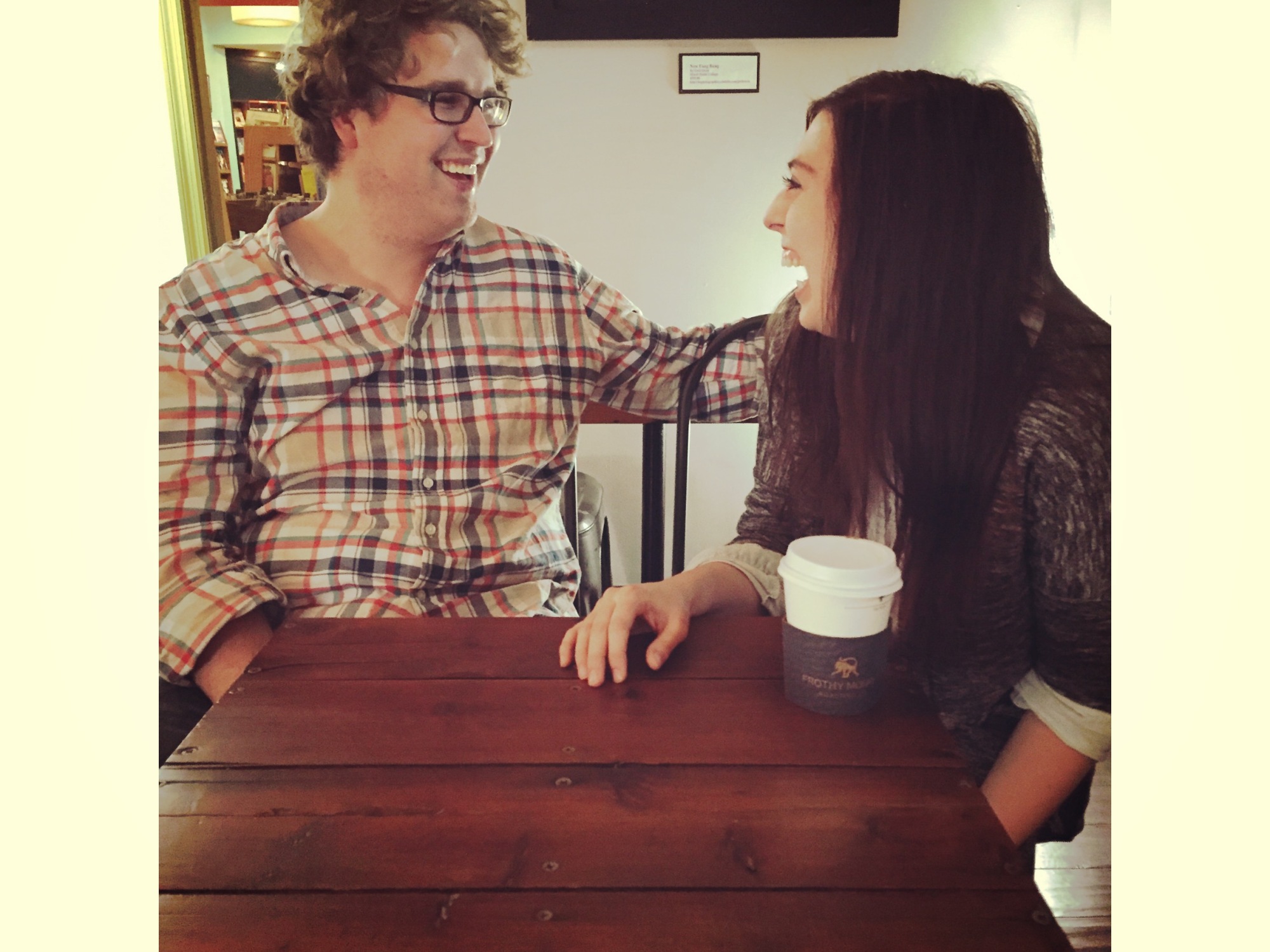 From the moment I met Austin & Emily I knew we’d all get along just fine. They arrived to chat about their music with smiles painted on their faces that were present throughout our entire conversation. A & Em formed on a whim and came to life slowly, but the duo is quickly realizing what it takes to make it in Nashville and are pursuing it head on. They gig so much, they don’t even remember what day it is:

“We had a show last night,” Austin started out only for Emily to quickly chime in, “we wrote last night!” She laughed.

“That’s right… what day is it again?” He was genuinely asking. He went on to say, “Tuesday we played at Blue Bar and last night we wrote.”

“We’re really critical of ourselves when we perform,” Emily explained when I asked how the show on Tuesday went.

“We were about 80% ourselves,” Austin chimed in.

It was clear from the moment I started talking music with this couple-turned-duo that the parts of their personalities that balanced their romantic relationship, were the same ones that allowed for compromise and growth in their musical one. There wasn’t much they disagreed on, except for maybe their general musical preferences, but the two were quick to compliment one another and point out the strengths in their partner that they thought enhanced their careers. 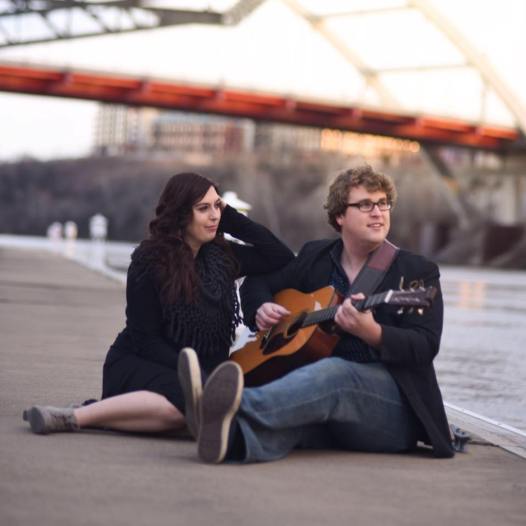 “We were definitely a couple first,” the two said almost in unison. It took them a while, but they agreed they started dating in January of 2014.

“We hit it off on New Years Eve,” Austin recounted. “I knew that she was a writer and she knew I was a guitarist but neither of us wanted to jump right into creating music together. It wasn’t until about nine months into our relationship that we wrote our first song,” he laughed.

“We drank a lot of wine and wrote a song called, ‘Desire,'” Emily added. “It worked better than we thought, but the idea of being duo has evolved slowly for us.”

Austin was a guitar major at Belmont and he describes Emily as a die-hard writer, the kind that’s “hard to come by.” He says she is the type of songwriter you don’t see every day and she says he has the ability to make melodies complicatedly perfect. The two pride themselves on being honest with one another.

“The writing process is different for every single song,” Emily explained. “Our earlier songs were always written together but now that I sort of pursue writing 9-5 and work at night, I usually come to him with lyrical ideas and he’ll incorporate himself into them musically.”

“What’s so great about us,” Austin started, “is that because we’re a couple in this musical relationship we have no barriers. We’re one-hundred-percent honest with one another. She’ll talk about the lyrics and I’ll let her know if she’s really saying what she wants it to say and I’ll experiment with chords judging by her faces whether they work or not,” the two laughed. “We leverage each other’s strengths.”

Emily handles the marketing and business side of things for A & Em, so she had an interesting take on how being in Nashville has influenced their career as a duo thus far.

“I think it’s good and bad. We’re not exactly country and if we were, I think we’d have a whole lot more spaces to perform, which would make things easier. That being said, I don’t think there is a better city for venues or gigging. Then again, I’m from here so it’s all I know.”

Austin, being from the small town of Sisters, Oregon, had a different take all together.

“When you’re a small town you’re a big fish,” he started. “Greg Barnhill said it best to me one time. He said; ‘when you start small, it’s a lot easier to build because you have that tight knit group supporting you.’ I work a 9-5 and Em works nights, so it’s hard for us to ever find time to practice. If you talk to a lot of professional musicians though, they all say the same thing. We’re just constantly gigging and the biggest difference between here and anywhere else is that you get paid in small towns,” he laughed.

On Superbowl Sunday the two did a live stream at Right off the Row and felt encouraged by the response they got.

“We went to right to a Superbowl party after the performance and I passed out on the couch during the game,” Emily admitted. “Performing is exhausting, but that was definitely Austin’s favorite show so far.”

Reminiscent of Striking Matches, the two are a Nashville duo with beautiful harmonies and a story to tell. Without even hesitating they said they are most inspired musically by Johnnyswim.

“Guess what I’m going to say.” Emily looked at Austin, but he already knew.

“I used to listen to a lot of bluegrass and electronic music,” Austin said. “Emily showed me Johnnyswim and we still listen to them in the car constantly. We actually went to their show in 12 South not too long ago and it was awesome.”

“I just want to be them,” Emily joked. But she was sort of serious because, let’s be real, they’re the perfect outlet of inspiration for these two. “They have honest relationship songs and those are my favorite kind.”

“They make music I can tolerate,” Austin added.

“As you can tell, it’s odd for us to like the same music,” said Emily, “so they’re always a nice compromise.”

The two are currently working on recording their original songs, “Blessed” and “Tattoo Rings” as part of their efforts to release and E.P. soon. Austin does all of their recording, mixing and mastering and now that he has a new set of monitors and doesn’t have to fully charge his laptop to mix in car to get bass from the speakers, with only an hour of battery from running the program logic to do it all – A & Em are hoping to be releasing music much sooner than they anticipated.

A & Em have a show tonight at Carpe Cafe @ 7 p.m. and a few more scattered throughout the month of March, so be on the lookout for this dynamic duo. 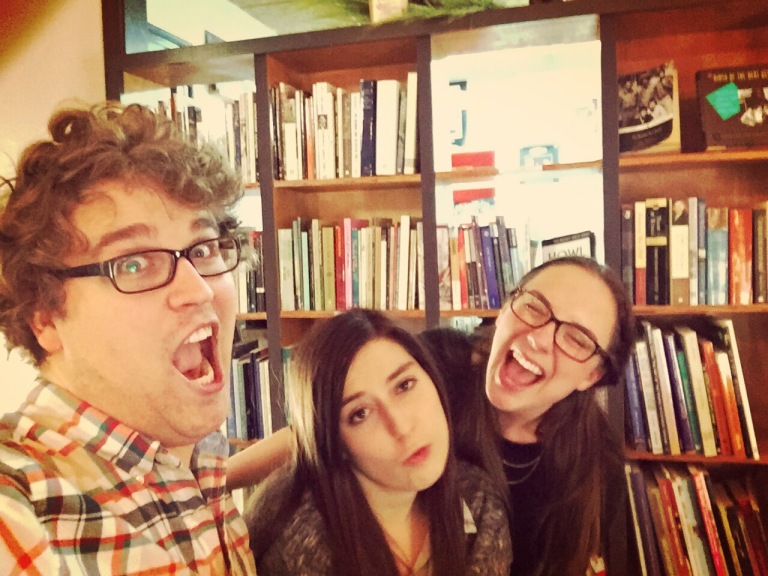