He worked for eight years in higher education admissions, which ultimately lead to him work for Dark Horse Studios’ institute sector.

“I went to school for audio engineering at Full Sail, so working at Dark Horse was like fantasy island for me. I had heard of Dark Horse before I even moved to Tennessee and went almost ten years living in this city without going there. When I was hired to assist with their institute program, it was just an added bonus that I was trained as an engineer. I made so many connections through working there; especially working a lot with the Pilgrimage Festival to find bands from that to record at Dark Horse. There was a lot of overlapping.”

All of that being said, Sean’s Dark Horse family supported him fully when he made the transition to run his own studio full-time.

“I started Hey World Productions in 2013. I was doing it on the side, for fun mostly and just to stay in practice with techniques. My wife and I want to have kids though, and with my full-time gig and studio on the side, at the time I was working eighty or so hours a week,” he laughed. “I felt like I was always an entrepreneur at heart and while there’s never a good time to make a leap like that, I knew I had to narrow it down. Robin Crow, the owner of Dark Hours and I left on great terms and now I’m involved with my studio whole-heartedly.”

“A home studio was so different for me because it was my own area. I heard once in one of my favorite podcasts, talking about ‘recording studio rockstars,’ and it was something like, ‘the most important thing you bring to any project is yourself.’ That really resonated with me. I try to make my space animated and fun. The more technical you are, the less personal things get. I think there’s a way to find balance between having a good time and getting work done,” he said.

As you can probably imagine from his time at Dark Horse and his time with his own studio thus far, Sean has worked with a lot of artists, but when it comes to his favorite he says,

“I’ve been working with a local artist, Michelle Rene who I’ve known almost my entire time in Nashville. Her husband brought us to 12th and Porter for one of her shows and I thought she was famous,” he laughed. “It was just such an amazing show. I co-produced a song of hers called ‘Solar Powered’ that will come out in the next month or so and it’s super fun and beachy.” 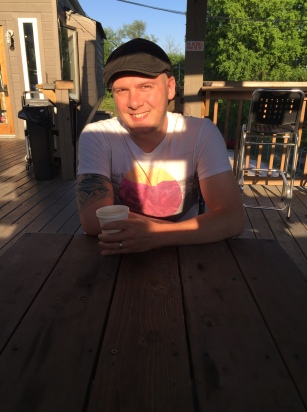 Sean confided that he really loves John Mayer, especially his Born & Raised album. There is a song on that album, “The Age of Worry,” that really spoke to him, so much show that he was inspired to get his first tattoo ever that turned into a partial sleeve. He said he put so much thought into the meaning behind it that by the time he was ready, he knew exactly what he wanted.

“I am the ship,” he pointed out. “I rely a lot on my faith, so the compass and design have a lot to do with that as well. My mom still refuses to see it,” he joked. “I keep telling her when she sees me in a t-shirt, she’ll have no choice.”

Describing himself to that of a method actor, Sean says he dives deep into the genre he’s mixing to draw inspiration. In his everyday life though, he draws inspiration from his family and those closest to him.

“My brother, Nathan is my biggest inspiration. He has special needs and as his little brother, I got the most gratification from making him laugh throughout the years. That was never hard though. He is always so happy and positive and he’s had so much happen to him. He is so strong and I admire him more than he’ll ever know.”

“My wife is so inspiring to me. She conducts herself with so much grace and we always say our individual strengths cover each other’s weaknesses.”

With an element of positivity in all things he does, Sean Rogers is a joy to know and work with from every perspective of the industry and I’m so excited to see what Hey World Productions has in store for 2016.