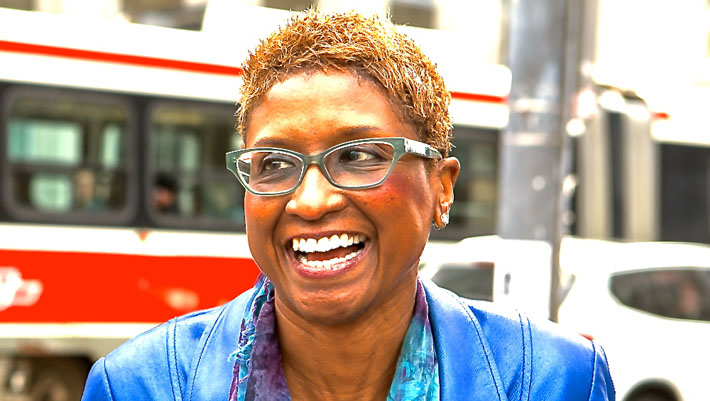 Paula Boggs is a true inspiration and should be recognized, not only as an artist, but a source of empowerment for all females. With the leaps and bounds we’ve made as a country from the times of segregation and gender separation you would think we couldn’t evolve much more than we already have. In light of recent actions toward the African American culture and the bold truth that women in the same positions as men still make less of a salary, it’s clear that molds still have to be shattered.

Paula Boggs has taken a hammer to every stereotype, pre conceived notion and disbelief, to show that a woman can do just about anything.

She previously served as General Counsel for Starbucks and was recognized by NASDAQ and Fortune as one of the best legal minds in the US. Paula also served for the White House Iran Contra task force and was trained as an Army paratrooper. In the midst of these accomplishments, she decided to shift gears toward music focusing on an album — Carnival of Miracles was released earlier this year.

Her latest feat entailed teaming up with both My Brother’s Keeper Alliance, which unites leaders across philanthropic, nonprofit, and private sectors to improve life outcomes of boys and men of color; as well as the NAACP Legal Defense Fund, the country’s first and foremost civil rights firm.

“The band formed pretty organically. Percussionist and vocalist Tor Dietrichson and I met through MySpace in 2006 after I stumbled upon his profile, listened to his music and realized we both lived in Seattle,” Paula explained when the question of the band formation came up. “I had just finished a year-long songwriters course through University of Washington where one of my teachers urged me to “keep going” with music and I thought percussion would be a good add to my acoustic guitar sound. I worked at Starbucks then and after some online back and forth, we met in a rehearsal space across the street from Starbucks headquarters building.

Later that year Paula Boggs Band’s lead guitarist and banjo player Mark Chinen and I met in Honolulu through mutual friends, discovering we both lived in Seattle and loved music. Drummer Sandy Greenbaum was in another band with our first bass player when he first started playing with us in 2007. Our first gig was at Seattle’s The Triple Door in January 2008 thanks to Tor’s connections with the club. Sandy knew bassist and vocalist Jarrett Mason through another band and Jarrett joined us in 2013 after our first bass player quit. Multi-instrumentalist and vocalist Tim Conroy moved to Seattle with Jarrett about 5 years ago with another band. When our first keyboardist quit, Jarrett recommended Tim, a fabulous addition to Paula Boggs Band.” 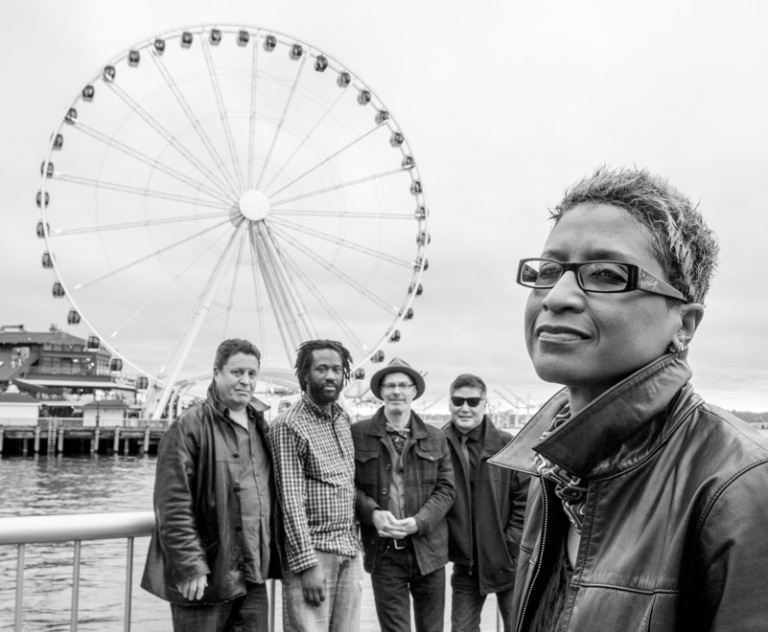 Just like Paula’s life, the story of her band is eclectic and unconventional. It was refreshing to hear that this wasn’t just another group of four individuals who met at college during a Spring BBQ in the quad and had an album the next week. There is a level of truth and maturity with the Paula Boggs Band that I think is hard to come by.

“I started with music as a youngster and it never completely went away,” Paula explained how music has always been a part of her life. “My parents insisted we Boggs kids start with piano, which I didn’t like and now understand it was more not liking the teacher than the instrument,” I think if you’ve ever been in music – you can relate to this. “I attended Catholic schools when folk music was coming of age in the Church. The nuns played Peter, Paul and Mary, Simon & Garfunkel, Bob Dylan and I fell in love with the guitar and that sound. I started playing guitar and writing music at age 10 and those influences are in the music I write today. Though my dad was Catholic, my mom was African Methodist Episcopal and the music of her church was also very important in my upbringing. My folks split up when I was 13 and mom took herself and children out of the segregated South (we lived in Richmond, VA) to Europe where she lived 23 years as a teacher and principal to kids of U.S. military personnel stationed there. Living in Europe exposed me to classical music, opera, jazz, European folk music, europop and rock. I wrote music through my early 30s and performed in coffeehouses and folk mass choirs. By my mid-30s, though I still loved music, my law career was in full swing and I no longer wrote or played. This lasted until a family tragedy 10 years ago propelled me to play again as a way to grieve. That triggering event leads to where I am today.”

Because music has been such an integral part of Paula’s life for so long, her songs have different meanings to her and she doesn’t see them so presently. She describes her songs as “old friends,” saying she started writing some as young as 23, that are just now coming out as finished products today.

“I don’t have a ‘favorite’ song but have traveled longest with ‘Look Straight Ahead’ – I wrote its first version at 23.

Songwriting works in many ways for me,” she explained. “Sometimes it starts with a triggering event – a newspaper article, a death. Other times it’s a storyline evolving over time. I have also written some songs melody first with lyrics coming later. I do need quiet and have written many songs while on or near water.”

As someone who interviews many people about the writing process and how it works for them, Paula’s truth about the inspiration of water and needing that solitude to write truly shines through in her music, and as a music lover, is something I really respect.

I asked Paula who would be the one celebrity dead or alive she like to sit down with for dinner and what would she say to them.

“Nina Simone,” she answered without hesitation. “She defied every box others tried to put her in. I’d say, ‘thank you for being YOU.'”

This struck a chord with me, because that’s the same thing I’d say to Paula, and I’m sure many others would feel the same way.

Paula spoke on her alliance with My Brother’s Keeper –

“Like many Americans, the deaths of Trayvon Martin, Michael Brown, Eric Garner and others shocked and sickened me. As a humanist and musician I wanted Paula Boggs Band to participate meaningfully in our nation’s struggle to become a more hopeful America racially. The partnership will hopefully help us do that. I wrote the first version of “Look Straight Ahead” as a young woman riding DC buses. One day an angry black male teen got on a bus I was riding and I could not take my eyes off him. The young man who inspired the song was a “Trayvon Martin” of his day. That realization caused me to re-write the song’s lyrics – making them more urgent, specific and current. After recording the new “Look Straight Ahead” on our album “Carnival of Miracles” I focused even more on the plight of too many young Americans, particularly boys and young men of color – out of work, not in school, disproportionately in the criminal justice system and shackled by the vestiges of slavery. As a former federal prosecutor and musician I came to realize my unique voice and so decided two things: (1) to invite the right hip hop artist to work with us so that “Look Straight Ahead” could be even more urgent and relevant and (2) partner with the right non-profits to amplify our ability to make a difference. J. Pinder was absolutely the right hip-hop artist and I believe My Brother’s Keeper Alliance and NAACP Legal Defense Fund are the right non-profits.”

With the new version of “Look Straight Ahead,” Paula hopes her audience will gain a new perspective.

“In the wake of Eric Garner’s death, the musician Questlove said the following: ‘I urge and challenge musicians and artists alike to push themselves to be a voice of the times that we live in…we need new Dylans. New Public Enemys. New Simones. New De La Roachas. Protest songs don’t have to be boring or non danceable or ready made for the next Olympics. They just have to speak truth…But my soul is aching man. Seriously just ONE or TWO songs that change the course. So who are the Bob Dylans?’ ‘Look Straight Ahead Remix, featuring J. Pinder’ and our partnership with My Brother’s Keeper Alliance and NAACP Legal Defense Fund is Paula Boggs Band’s attempt to answer Questlove’s call to action,” she said.

I asked Paula one last question, something I may have already known the answer to, but wanted a wiser insight. Were her dreams the same ten years ago as they are today?

“Not all of my dreams are the same as back in 2005. Back then I dreamed our country would someday elect a black president and embrace marriage equality. I aspired to be the best life partner for the love of my life, hoped I could be the best lawyer for my client Starbucks and more broadly do things to help leave our planet a little better than I found it. I still strive for two of those things and God willing, I’ll still be at it 10 years from now.”

To say speaking with Paula about her career and history was inspiring would be an understatement. In a world where Pop culture is more focused on than national troubles and Justin Bieber can make the front page of a newspaper before an unjust arrest can, it’s reassuring to know individuals like Paula are constantly working toward change and, especially, incorporating the power of music.

2 thoughts on “The Unconventional Life of Paula Boggs”